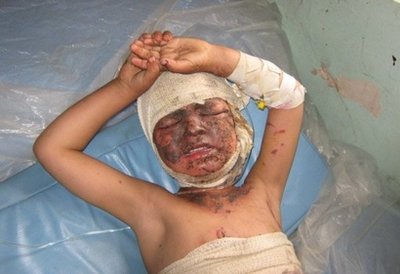 An injured Afghan child in a hospital in western Farah on May 6, 2009.(AFP/File)

Villagers who survived the bombing of houses packed with terrified civilians told Reuters by telephone dozens of members of one extended family alone had died. They wept as they spoke of orphaned children and burying loved ones’ fragmented remains.

“My son and my daughter in-law have been killed and left me with a 13-month-old baby,” said Gul Bibi from Geraani village.

“Their remains were buried in a mass grave with others, and I didn’t even have a chance to see his face for the last time because his body was blown apart,” she sobbed.

“There were Taliban in the area, and fierce fighting during the day but it ended when it was dark. People thought the fighting was over when suddenly bombings began,” he said.

Rohul Amin, governor of Farah province, where the bombing took place late on Monday and fighting raged into Tuesday, said he feared 100 civilians had been killed. Provincial police chief Abdul Ghafar Watandar said the death toll could be even higher.

If confirmed, those even higher figures could make the incident the single deadliest for Afghan civilians since the campaign to topple the Taliban in 2001.

Karzai called the civilian deaths “unjustifiable and unacceptable,” and would raise them with Obama at their meeting in Washington later on Wednesday, his office said. He dispatched a joint Afghan-U.S. delegation to investigate.

Civilian casualties are a source of great strain between Washington and Kabul at a time of rising violence by Islamist Taliban insurgents and with U.S. troop numbers due to be more than doubled by the end of the year.

Jessica Barry, spokeswoman for the International Committee of the Red Cross, said the Geneva-based group had sent a team which reached the scene of the air strikes on Tuesday afternoon.

“There were women and there were children who were killed. It seemed they were trying to shelter in houses when they were hit,” she said. The team saw houses destroyed and dozens of bodies, providing the first international confirmation of the incident.

Among the dead was a first-aid volunteer for Afghanistan’s Red Crescent, killed along with 13 members of his family, she said. The Red Cross could not determine whether fighters were among the dead, she added.

Survivors said they were frustrated that Afghan and foreign teams that visited the village had not offered any help.

“They just photographed us and that was it,” said 60-year-old Haji Mohammad Shah, who lost nine family members including his wife, daughter and grandchildren.

“We don’t want anything from the government or those who killed them, nothing can replace my family,” he added, bursting into tears.

U.S. forces in Afghanistan acknowledge they were involved in fighting and air strikes in the province’s Bala Boluk district, which began on Monday and continued into Tuesday after Taliban militants seized a village and clashed with Afghan troops.

Watandar, the provincial police chief, said Taliban guerrillas had used the civilians as shields, herding them into houses in the villages of Geraani and Ganj Abad, that were then struck by U.S.-led coalition warplanes.

“The fighting was going on in another village, but the Taliban escaped to these two villages, where they used people as human shields. The air strikes killed about 120 civilians and destroyed 17 houses,” he said, adding the toll was imprecise.

Villagers trucked about 30 dead bodies to the provincial capital Farah City on Tuesday to prove that dozens had been killed in the strikes, said governor Amin.

Taliban spokesman Qari Yousuf Ahmadi confirmed there had been fighting and said all casualties from air strikes were civilians.

“The government and foreign troops must compensate the affected people, we don’t want apologies any more,” he said by telephone from an undisclosed location.

U.S. and NATO forces in Afghanistan have established new drills they say are intended to reduce the number of civilian casualties, following outrage over an incident last year in which Afghan and U.N. investigators said U.S. strikes killed 90 people.