By POPEYE
Tweet
(USA TODAY)    Marines are trying to kill themselves at a record pace this year despite a 2009 program aimed at stemming the problem, according to Marine Corps data.

Eighty-nine Marines tried to commit suicide through May, most commonly by overdose or lacerations, according to statistics and the Marine Corps suicide prevention program officer, Navy Cmdr. Aaron Werbel. At that rate, there could be more than 210 attempted suicides this year. 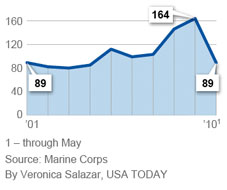 With 21 confirmed or suspected suicides by Marines this year, the Corps is on track to near last year’s record number of 52, Werbel says. The Marine Corps suicide rate in 2009 was 24-per-100,000, the highest in the military, Marine records show. The latest demographically adjusted suicide rate among civilians in 2006 was 20 per 100,000, federal records show.

The Marines introduced a training program for sergeants and corporals last year aimed at suicide education and urging them to become more knowledgeable about the lives of their younger Marines.

“We continue to maintain that this is an issue of leadership and getting our Marines who need help to the care they deserve,” says Marine Lt. Gen. Richard Zilmer, deputy commandant of Manpower and Reserve Affairs. “In every case, there is a unique life to understand behind the statistics.”

Werbel says there is some hint of progress — the proportion of suicides committed by Marines who are sergeants or lower ranking has declined from a high of 93% to 79% this year.

Recent improvements in tracking suicide attempts may have contributed to more reports, says Werbel, a psychologist. But the Marine Corps has been at the forefront of combat operations in Iraq and Afghanistan for more than seven years and the strain is showing, he says.

“It’s been a sustained operational tempo for years … and there’s no question but that that causes distress on our Marines, on family members,” he says.

Twelve of the 21 confirmed or suspected suicides this year were among Marines who were or had been in combat, statistics show.

Suicides are rising across the military and researchers are struggling to understand why.

The increase may be the result of servicemembers acquiring a “fearlessness” about harming themselves and some of those suffering mental health issues where they feel alienated or useless, says Thomas Joiner, a psychology professor at Florida State University who is working with the Army on ways to identify at-risk soldiers through screening.

Much attention has been focused on the active-duty Army, which is more than twice the size of the Marine Corps. It suffered a record 163 soldier suicides in 2009, Army records show.

But the suicide rate in the Marine Corps eclipsed the Army’s 22-per-100,000 rate last year. There are fewer Army suicides this year than at this time last year, Army statistics show.

Werbel says there are plans to place civilian suicide prevention coordinators at each Marine installation and to provide a distress hotline. “We keep plugging away. We keep fighting to win this (struggle against suicide) and to figure out how to better arm our Marines with tools, resources they need to help each other,” Werbel says.