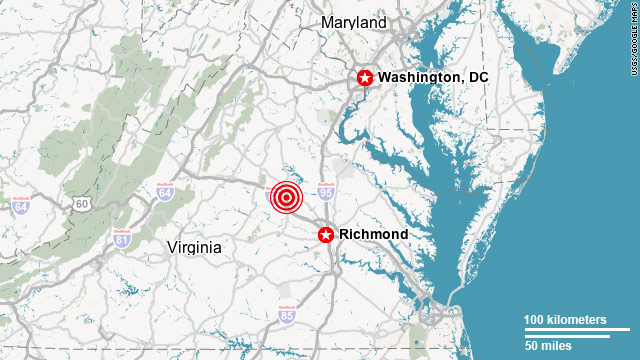 (CNN)   An earthquake with a preliminary magnitude of 5.8 struck near Washington, D.C., the U.S.Geological Survey said.

The epicenter was in Virginia.

The quake was felt in Philadelphia, Pennsylvania; New York City and on Martha’s Vineyard where President Barack Obama is vacationing. Cell phone service has been disrupted in New York City where parts of Manhattan have been evacuated.

“Everybody was told to take the stairs,” Wolf Blitzer said, speaking live at 2 p.m. E.T. from CNN’s D.C. bureau.

The Pentagon has been evacuated, CNN’s Barbara Starr reports. “When the building began shaking rather violently, hundreds of people began streaming out,” she said, because many people thought that the building was under attack. Starr was standing in the Pentagon’s press office when the roof started to shake.

Twitter traffic suggests the quake was felt all over the east coast.

In Cleveland, “tribeinsider” wrote “I’m no expert but i think we just had an earthquake here.”

And even in Toronto, tweets said that the shaking could be felt for minutes.