Plea to Obama For Help Leads to an Immigrant’s Arrest

(NY TIMES)   The letter appealing to President Obama was written in frustration in January, by a woman who saw her family reflected in his. She was a white United States citizen married to an African man, and the couple — college-educated professionals in Manhattan — were stymied in their long legal battle to keep him in the country. 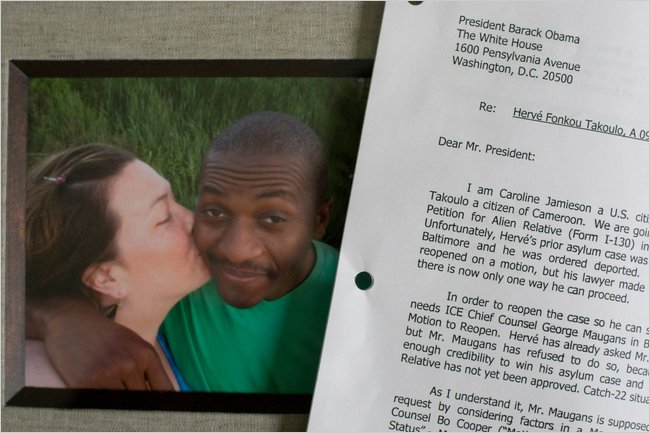 Could the president help, asked the woman, Caroline Jamieson, a marketing executive. She described the impasse that confronted her husband, Hervé Fonkou Takoulo, a citizen of Cameroon with an outstanding deportation order from a failed bid for asylum.

The response came on June 3, when two immigrationagents stopped Mr. Takoulo, 34, in front of the couple’s East Village apartment building. He says one agent asked him, “Did you write a letter to President Obama?”

When he acknowledged that his wife had, he was handcuffed and sent to an immigration jail in New Jersey for deportation.

But on Thursday night, Mr. Takoulo was just as suddenly released, after Immigration and Customs Enforcementofficials had been questioned about the case by The New York Times.

Officials said they were investigating how the letter — one of thousands routinely referred to the agency by the White House to gather information for a reply — had been improperly used by the agency’s “fugitive operations” unit to find and arrest Mr. Takoulo, who has an engineering degree and no criminal record.

While Mr. Takoulo is still subject to the deportation order, immigration officials acknowledged that their actions in the case seemed to violate their standard practice of not using letters seeking help from elected officials as investigative leads. The handling of the case also conflicted with the Obama administration’s stated policy of arresting deportable immigrants only if they have criminal records.

The agency is investigating how it happened, a spokesman said, and has released Mr. Takoulo on an electronic ankle monitor while his case is reviewed.

“ICE has a zero tolerance policy for violations of civil rights,” the spokesman, Brian P. Hale, said in a statement, adding that if it was determined “that appropriate separation between lawful correspondence and investigations was violated,” the case would be referred for immediate action by the agency’s Office of Professional Responsibility and the inspector general of the Department of Homeland Security.

Though the case is being treated as an anomaly that breached accepted procedures, a senior agency official acknowledged that there were no written guidelines on the handling of such letters, and that there was no way to know whether similar correspondence had prompted arrests and deportations.

If the investigation bears out what officials have learned so far, “it also flies in the face of our stated priorities to target criminal fugitives,” said the official, who spoke on the condition of anonymity because the agency had not authorized further discussion of the case.

So far, it appears that Ms. Jamieson’s Jan. 10 letter to the president reached the executive secretariat of the immigration enforcement agency on March 8. The secretariat, which handles all official correspondence, sent it to the New York field office the next day, asking for help in drafting a response.

The letter explained that Ms. Jamieson, 42, had filed a petition seeking a green card for her husband on the basis of their 2005 marriage. But before they met, Mr. Takoulo, who first arrived in the country on a temporary business visa, had applied for political asylum and had been denied it by an immigration judge in Baltimore, who ordered him deported.

Only if the agency’s chief counsel in Baltimore agreed to reopen the case, the letter said, could that order be suspended long enough for the couple to safely go to federal immigration headquarters in Manhattan for an interview to prove that their marriage was not a sham.

Mr. Takoulo, who had helped write the letter, recalled how he had imagined the president would react. “My hope was that he would call the chief counsel and say, ‘This is ridiculous — just open this case,’ ” Mr. Takoulo said, adding: “He’s even said on TV that he needs engineers.”

Mr. Takoulo, who worked his way through Stony Brook University, says he now spends his days trading stocks from the couple’s apartment because he lacks papers to accept the engineering jobs he was offered when he graduated in 2008.

Typically, officials said, the New York field office would have sent a letter like Ms. Jamieson’s back to the secretariat in Washington with a summary of the case, or would perhaps have referred the matter to Baltimore, where the old deportation case was based.

Instead, someone promptly sent it to the district’s fugitive operations unit.

Under the Bush administration, the agency had a record of portraying its raids as carefully planned hunts for dangerous immigrant fugitives, while instead going after easier targets.

John Morton, who leads the agency under the Obama administration, recently said that it would no longer seek out immigration violators without criminal records, and that it was focusing its resources “on identifying and removing the most serious criminal offenders first and foremost.”

Nevertheless, two agents with the National Fugitive Operations Program were dispatched to the East Village to wait for Mr. Takoulo, who was stopped about 9:30 a.m. as he left home.

He said that after asking questioning him about the letter, they told him, “We’re ICE and we’re here to arrest you because President Obama sent the letter for a review, and we reviewed it and we denied it.”

He was soon in shackles, on his way to the Hudson County Correctional Center in New Jersey, where he spent two weeks in a dormitory with 47 other men, mostly criminal offenders.

Ms. Jamieson campaigned for his release with help from her colleagues at Digitas, a new-media advertising company where she is vice president of marketing. When the latest legal motion to reopen his case was denied last week, she turned to the news media.

Friends and family had filled a dossier with affidavits testifying to the couple’s loving relationship, which began seven years ago at an East Village cafe where Mr. Takoulo worked.

On Thursday night, she sobbed with relief as she embraced her newly released husband outside an immigration processing jail on Varick Street.

Later, they celebrated with his two nieces who are studying at New York colleges on student visas. But Ms. Jamieson veered between joy and distress.

“I’ve been feeling very confused and ashamed as an American citizen,” she said, evoking her family’s eclectic immigrant origins.

Her father, an emeritus professor of East Asian languages and cultures at the University of California, Berkeley, is the son of Scottish immigrants; her mother’s family were refugees from North Korea; her stepmother is Chinese; and her sister’s husband is Egyptian.

All experienced some immigration problems, she said, but “the idea that in the year 2010 I and my family are having the worst and the most barbaric experience — it’s just shameful to me.”

Ms. Jamieson recalled that she cried when Mr. Obama said during a 2008 campaign speech, “With a mother from Kansas and a father from Kenya — ”

“I said, ‘Oh, Hervé, even the alliteration is right — with a mother from California and a father from Cameroon, our child could do the same!’ ”

But they have postponed having the baby they both want, she said, because of his precarious immigration status. One step forward: officials told him he will be granted a work permit after he reports to immigration headquarters on July 1.