Meet Mikey Hicks, 8: U.S. has him on watch list

(NY TIMES)   The Transportation Security Administration, under scrutiny after last month’s bombing attempt, has on its Web site a “mythbuster” that tries to reassure the public. 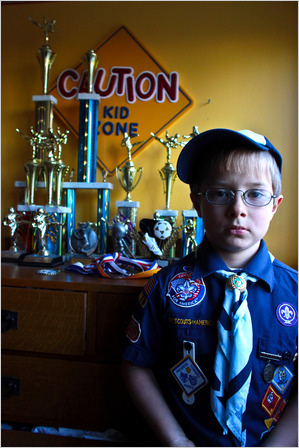 Michael Hicks, 8, a Cub Scout in Clifton, N.J., has the same name as a suspicious person.

“Meet Mikey Hicks,” said Najlah Feanny Hicks, introducing her 8-year-old son, a New Jersey Cub Scout and frequent traveler who has seldom boarded a plane without a hassle because he shares the name of a suspicious person. “It’s not a myth.”

Michael Winston Hicks’s mother initially sensed trouble when he was a baby and she could not get a seat for him on their flight to Florida at an airport kiosk; airline officials explained that his name “was on the list,” she recalled.

The first time he was patted down, at Newark Liberty International Airport, Mikey was 2. He cried.

After years of long delays and waits for supervisors at every airport ticket counter, this year’s vacation to the Bahamas badly shook up the family. Mikey was frisked on the way there, then more aggressively on the way home.

“Up your arms, down your arms, up your crotch — someone is patting your 8-year-old down like he’s a criminal,” Mrs. Hicks recounted. “A terrorist can blow his underwear up and they don’t catch him. But my 8-year-old can’t walk through security without being frisked.”

It is true that Mikey is not on the federal government’s “no-fly” list, which includes about 2,500 people, less than 10 percent of them from the United States. But his name appears to be among some 13,500 on the larger “selectee” list, which sets off a high level of security screening.

At some point, someone named Michael Hicks made the Department of Homeland Security suspicious, and little Mikey is still paying the price. (His father, also named Michael Hicks, was stopped for the first time on the Bahamas trip.)

Both lists are maintained by the Terrorist Screening Center, which includes the Federal Bureau of Investigation. They are given to the Transportation Security Administration, which in turn sends them to the airlines.

A spokesman for the T.S.A., James Fotenos, said that as a rule, “there are no children on the no-fly or selectee lists,” but would not comment on Mikey’s situation specifically.

For every person on the lists, hundreds of others may get caught up simply because they share the same name; a quick scan through a national phone directory unearthed 1,600 Michael Hickses. Over the past three years, 81,793 frustrated travelers have formally asked that they be struck from the watch list through the Department of Homeland Security; more than 25,000 of their cases are still pending. Others have taken more drastic measures.

Mario Labbé, a frequent-flying Canadian record-company executive, started having problems at airports shortly after Sept. 11, 2001, with lengthy delays at checkpoints and mysterious questions about Japan. By 2005, he stopped flying to the United States from Canada, instead meeting American clients in France. Then a forced rerouting to Miami in 2008 led to six hours of questions.

“What’s the name of your mother? Your father? When were you last in Japan?” Mr. Labbé recalled being asked. “Always the same questions in different order. And sometimes, it’s quite aggressive, not funny at all.”

Fed up, in the summer of 2008, he changed his name to François Mario Labbé. The problem vanished.

Several Web sites, including the T.S.A.’s own blog, are rife with tales of misidentification and strategies for solving them. Some travelers purposely misspell their own names when buying tickets, apparently enough to fool the system. Even the late Senator Edward M. Kennedy once found himself on a list.

“We can’t just throw a bunch of names on these lists and call it security,” said Representative William J. Pascrell Jr., a New Jersey Democrat. “If we can’t get an 8-year-old off the list, the whole list becomes suspect.”

Mr. Fotenos, the T.S.A. spokesman, promised improvements in a few months, as the agency’s Secure Flight Program takes full effect. Under the new system, airlines will collect every passenger’s birth date and gender, along with their names. The T.S.A. will cross-check all that with the watch lists. Previously, the airlines cross-checked the lists themselves, using only the names.

Certainly, Mikey’s date of birth, less than a month before 9/11, should prevent him from being mistaken as a terrorist.

A third grader at a parochial school in Clifton, N.J., Mikey recites the drill like the world-weary traveler he is. Leave early for the airport, always with his passport. Try to get a boarding pass at the counter. This will send up a flag. The ticket agent, peering down at tiny bespectacled Mikey, will apologize or roll her eyes, and call for a supervisor. The supervisor, after a phone call — or, more likely, a series of phone calls — will ultimately finagle him onto the plane. But the Hickses are typically the last to select seats and the last to board, which means they sometimes can’t sit together.

Mrs. Hicks, a photojournalist who herself got Secret Service clearance to travel aboard Air Force II with then-Vice President Al Gore, anticipated additional chaos following the attempted underwear bombing. Before leaving for the Bahamas on Jan. 2, she reached out to Congressman Pascrell’s office, which then enlisted a T.S.A. agent to meet the family at the airport. Even this did not prevent Mikey from an extra pat-down.

On the way home last Friday, Mikey’s boarding pass showed four giant red S’s at the airport in Nassau. “Oh, random screening,” Mrs. Hicks said. Mikey asked his mother not to worry and said he would use his tae kwon do — he has a junior black belt — if needed. Mrs. Hicks said she wanted to take pictures of her son being frisked but was told it was against the rules.

Mikey, who would rather talk about BMX bikes and his athletic trophies than airport security, remains perplexed about the “list” and the hurdles he must clear. “Why do they think a kid is a terrorist?” Mikey asked his mother at one point during the interview.

Mrs. Hicks said the family was amused by the mistake at first. But that amusement quickly turned to annoyance and anger. It should not take seven years to correct the problem, Mrs. Hicks said. She applied for redress in December when she first heard about the Department of Homeland Security’s program.

“I understand the need for security,” she added. “But this is ridiculous. It’s quite clear that he is 8 years old, and while he may have terroristic tendencies at home, he does not have those on a plane.”