By red
Tweet
(NYTimes)   Tucked at the end of a witness list otherwise filled with doctors, engineers, scientists, and disaster-response specialists testifying before a House committee today about the Gulf oil spill, one name stood out: Kevin Costner. 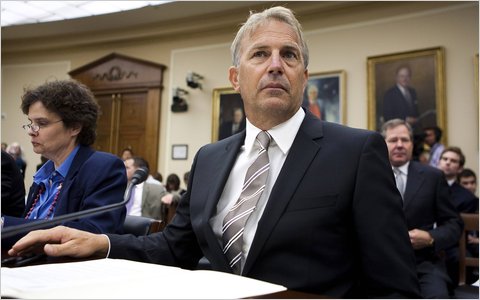 Joshua Roberts/ReutersKevin Costner prepared to testify at the House Science and Technology Energy and Environment Subcommittee on the continuing oil spill in the Gulf of Mexico, in Washington.

The movie star came to Washington, not, as he put it, because he “heard a voice in a cornfield,” referring to the 1989 film “Field of Dreams,” in which he starred. Rather he was there to promote a machine, an oil-water separator; over nearly two decades he has invested $20 million of his own money in the separator’s development, in partnership with the Louisiana-based Ocean Therapy Solutions.

In testimony submitted to the House Committee on Science and Technology, Mr. Costner claimed that the largest unit could separate oil from 200 gallons of polluted water in a minute. He said that BP, the company that owns the well that exploded in the gulf, has ordered 32 of these machines.

Mr. Costner said he first became interested in developing the machine after the 1989 Exxon Valdez oil spill in Prince William Sound off Alaska, and in 1993 bought the patent to the technology.

“I don’t know if I’m embarrassed about the amount of money I spent,” Mr. Costner said. “Am I up here hawking my product? I guess, I don’t know.”

He added: “I’ve never seen one machine that deals with getting the oil out. That’s me.”

Another company does make an oil-water separator using different technology. Fort Lauderdale-based Enviro Voraxial Inc. makes a machine that is still being reviewed by BP for use in the gulf spill. John A. DiBella, Enviro Voraxial’s chief operating officer, said in an interview that the mid-sized version of his company’s machine can process up to 500 gallons of polluted water per minute.

“Unfortunately I don’t have the good looks or the awareness of Mr. Costner,” Mr. DiBella said.

Mr. Costner used his testimony to take aim both at industry players and government regulators, saying oil companies were unwilling to invest in his machine because they did not believe another disaster would happen, while regulators trapped his company in a “Catch-22” situation, in which unapproved machinery is not allowed at actual oil spills, but machinery cannot win approval without being tested at spill sites.

But Dr. Nancy Kinner, co-director of the Coastal Response Research Center at the University of New Hampshire, sitting next to Mr. Costner on the panel, argued that agencies responding to oil spills must be sure that any clean-up tools do not exacerbate the spill, and thus cannot let untested machines out onto spill sites.

At points, Mr. Costner’s testimony provided comic relief in what was otherwise a grim discussion of the possible environmental and economic fallout as the oil spill continues to grow.

Referring to the Minerals Management Service, the government agency mandated with overseeing natural resources on the outer continental shelf, Mr. Costner could not recall the shorthand for the agency without some help from the crowd.

“There are so many initials I have a hard time,” he said, provoking laughter from the committee members.