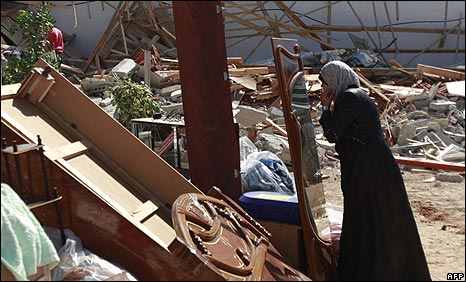 Israel has demolished hundreds of Palestinian homes built without "permits"

(BBC)   Israeli authorities have demolished two Palestinian-owned structures in East Jerusalem, in defiance of international calls to stop such actions.

Palestinian reports say a family of five was forcibly evicted from their home in the Beit Hanina district before the building was demolished.

Israeli bulldozers then destroyed the foundations of another building nearby.

Israel says buildings subject to demolition orders have been built without permits.

Palestinians say it is virtually impossible to obtain the necessary approval from Israel’s municipal authorities in Jerusalem.

The Israeli human rights group B’Tselem , says the authorities have demolished about 420 Palestinian-owned houses in East Jerusalem since 2004 saying they were built without permits.

Israel occupied the territory in the 1967 war and annexed it soon afterwards in a move that has not been recognised internationally.