Following a visit yesterday to some young prisoners being held at the Megiddo Prison, lawyers for the Ministry of Detainees have stated that the young prisoners testified under oath that they had been interrogated and systematically electrocuted and tortured by Israeli intelligence officers in settlements near to Palestinian cities. 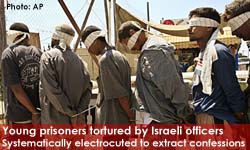 According to Salim Redouane who was arrested near Qalqilya on 08.05.2010, he was kept in a camp near Tzofin for 3 hours before being transferred to the settlement of Ariel where he was questioned by Shin Bet interrogators. His head was repeatedly hit against the prison room wall in an effort to get him to confess and he was beaten severely. The investigators threatened to burn his skin if he did not confess to the accusations against him.

Another detainee, Mohamed Ali Radwan, informed the lawyers that he was arrested at his home in Qalqilya Azzun on 3/8/2010 and one of the soldiers forced him to take off his shirt in order to use it as a blindfold. He was handcuffed and then taken somewhere near the village where he was told to hand in what was in his possession before he was hit in the back with a rifle butt and kicked repeatedly in the stomach and on the back. One of the soldiers then dragged him across the ground which resulted in deep wounds on his hands and he was taken to the Ariel settlement where he was questioned for several hours and was hit on the head, in the face and all over his the body.

According to the testimony of Yahya Ali Abdel-Hafez, born 03.07.1995 and a resident of the Qalqilya Governorate of Azzoun, he was arrested on 05.08.2010 near the city of Qalqilya and taken to a camp near Tzofin where he was kept for 3 hours before being transferred to the settlement of Ariel and interrogated. During the interrogation, he did not recognize some of the charges against him and so he was beaten in the face several times and repeatedly electrocuted. Under duress, Yahya eventually signed the statement to avoid further torture.

Lawyers also visited Abdul Hamid Abdul Latif Sa’id Abu Haniyeh who is currently in year 10 and was born on 12/11/1994. A resident of Azzun, he was arrested on 05.08.2010 near Qalqilya, where was also taken to the Ariel settlement and interrogated by Shin Bet interrogators. He was beaten up severely before being hit hard by a large jolt of electricity. A terrified Abdul Hamid who thought he would be imprisoned at the Megiddo prison along with his brothers, signed the statement he was given.

Lawyers for the Ministry of Prisoners also visited Ahmed Hussein Mustafa who was born on 10/01/1994 and is from Jalazoun, north of Ramallah. He was arrested from his home at three in the morning on 11.02.2010 and was beaten up inside his house before being taken to the Beit El settlement. Ahmed remained in the settlement until daybreak when he was transferred to Benjamin where he was fined 2000 NIS and sentenced to 20 months in detention. His two brothers were detained in the Negev prison