(BBC)   Israeli spying devices that were planted during the 2006 war with Hezbollah have been discovered in southern Lebanon, the UN has said. 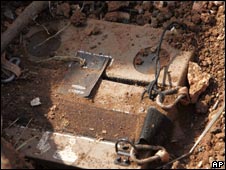 UN peacekeepers discovered the buried devices when they were blown up by remote control by Israel on Sunday.

Israel has declined to comment directly on the matter.

The incident comes at a time of increased tension between the Lebanese authorities and Israel.

Earlier in October the Israeli army released a video which it said showed Hezbollah removing munitions from the scene of an explosion near the city of Tyre.

Under the same UN Security Council resolution, there should be no weapons south of the Litani river except in the hands of regular Lebanese forces and peacekeepers.

Hezbollah subsequently broadcast its own video which it said disproved the claims.

It also says overflights by Israeli spy-planes violate the resolution.

The war between Hezbollah and Israel in 2006 lasted 33-days during which time Hezbollah fired a hail of rockets into Israel and the Israelis bombed carried out a huge bombing campaign across Lebanon and a large ground incursion.

More than 1,125 Lebanese died during the conflict, as well as 119 Israeli soldiers and 40 Israeli civilians.

The UN Security Council unanimously adopted Resolution 1701 (2006) calling for the end of hostilities, the demilitarisation of the south of Lebanon and a mandate for a UN Interim Force in Lebanon (UNIFIL) to oversee the implementation of the resolution.