IS ISRAEL RUNNING THE PAKISTANI TALIBAN?

IS ISRAEL RUNNING THE PAKISTANI TALIBAN?
Posted on Pakalert on September 5, 2010
http://www.pakalertpress.com/2010/09/05/is-israel-running-the-pakistani-taliban/

Pakistan Taliban threaten attacks on US and Europe

A senior commander in the Pakistan Taliban last night announced it was planning terror strikes against targets in the US and Europe similar to the Times Square bomb plot.

A powerful group within the United States, one with influence over the press and the ability to derail an investigation as was done with 9/11, has been “tasked” with laying the groundwork for a terrorist attack on America, one using nuclear material. This report, unneeded, and highly inaccurate was printed in the New York Times to provide “cover.” It isn’t just this report, the pieces are falling together around the world. The Wiki-Leaks story, pre staging Pakistan’s ISI as a terrorist organization, a story built out of almost no information but fleshed out with massive speculation by “operatives” in the press is part of the process.

Yesterday, 43 Pakistanis were killed in a terror attack, killed for supporting Palestinians in Gaza. The signs had been there, the Wikileaks attempt to put responsibility for the Taliban on Veterans Today editor General Hamid Gul. This was debunked in a heartbeat. This attack was vicious and clearly the work of Israel. This was a terror attack meant as a message to the people of the world telling them that if they rally in support of those imprisoned in Gaza, they will be murdered. 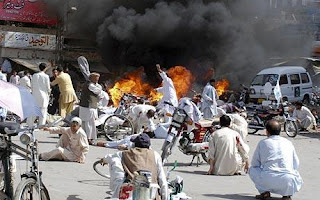 This is far from the first time Israel has been caught. The PKK, the Kurdish terrorist group, communists, who have been attacking Turkey from their mountain “caves” in Iraq for over 40 years have long been trained, funded and even recruited by Israel’s Mossad. Now the partnership between India and Israel, helped along, not only by the CIA, the Kazrai brothers “corporation” and MI -6 is becoming difficult to ignore.

With continual terror attacks a daily part of life in Pakistan, several in Lahore this week, there is no ignoring the real culprits. Nearly every contracting firm the United States uses in, not only Afghanistan but Pakistan as well, is filled to the brim with Israeli operatives. Working with them is the massive CIA assisted drug cartel and its worldwide network of private airlines for shipping heroin and cash and a dozen nations that take part.

All of this is only window dressing for the real show. In 2003, Israel got America to destroy Iraq, well, and itself also. The war in Afghanistan is destroying, not only that country but Pakistan as well. Israel will not allow an Islamic nuclear power to threaten their control over Asia. The real target has always been control of the Suez Canal and the real prize, India. What appears to America to be an economic powerhouse is a deeply divided and trouble nation beset by enemies and ready to be turned into a surrogate military power and then stripped to the bones.

This is what happened to the United States.

Pakistan is important. For years, the “CIA” and other intelligence organizations have been in Baluchistan sneaking in and out of Iran blowing things up. How much of that is CIA and how much is Mossad, nobody knows for sure. This is another terrorist organization, called the “Jundallah.” Like the PKK in Turkey and the Tehrik-i-Taliban, the terrorist group making life in Pakistan a living hell, the Jundallah get all the money, weapons, training, transportation and maybe more, much more, they need to fight covert wars against the targets of Tel Aviv.

For Americans, the real question, if Israel is funding terrorist organizations attacking, not only Iran but America’s NATO partner Turkey and longtime ally Pakistan, facts long in evidence everywhere but in the American press, are there also terrorist attacks against American forces and America itself being planned? Have any been carried out and if so, how many?

Does Israel gain when America marches to war against her perceived enemies? Is it a long declared policy to do anything necessary, not actually to enhance Israel’s survival, never really in question at all, not really ever actually, but their dominance?

What was obvious today is that the terror attack in Pakistan had nothing to do with Taliban of any kind. It had only one goal, to punish the people of Pakistan, ethnic Pushtu’s, not the ruling Punjabi’s, for supporting the Palestinian cause and supporting a two-state solution during the current peace initiative sponsored by President Obama. We know Israel goes after anyone who stands up for Palestine but killing dozens of civilians at a rally in Quetta, Baluchistan is an escalation, even for Israel.

No, this isn’t an escalation in violence, it isn’t even close to the biggest body count Israel has run up.

Perhaps the worst part of it is that nobody will say a word about this. Pakistan is broke, even by American standards. They survive off American foreign aid, money they continue to receive as long as they never say a word about Israel of publicly attribute the wave of terrorism they have been subjected to where the real blame belongs. I have seen the head of Pakistan’s intelligence agency, the current Director General of the ISI, hint at Osama bin Laden being dead. I have interviewed him about it personally.

I was sworn to keep the discussion private and confidential. I will keep my word.

Pakistan is being held hostage. Mrs. Clinton continually chastises them about failing to find long dead Osama bin Laden, the imaginary planner of 9/11. Former ISI Director General Hamid Gul, now retired and known for his outspoken honesty, places the blame for 9/11 exactly where it belongs, where he placed on the day it happened. With the Israeli lobby in control of Washington and Washington’s money in control of Pakistan, this won’t be the last terror attack.

The next time anyone anywhere tries to aid Palestinians or to get the truth about Israel’s apartheid policies and ethnic cleansing past the corporte controlled press, expect another suicide bombing. Look at the way the press handled Israeli murder and piracy with the Freedom Flotilla? Less than 5% of Americans know that Israel was caught back in 1967 knowingly attacking an American ship, the USS Liberty. It wasn’t the first Israeli terror attack on Americans and there have been dozens since. You will never read a word about them.

With another 9/11 anniversary coming up, Palestine peace talks going on and Israel doing everthing in its power to force America to attack Iran, security forces throughout the United States are on high alert for Islamic terrorists.

Everyone ‘in the know” understand that the warning is really for Israeli terrorists. Will the United States Air Force be there if needed, unlike during 9/11? Will terrorists all show up with fresh student visas courtesty of the State Department like during 9/11?

Are we past the time when America is willing to look the other way when a thousand strange coincidences bring about that “perfect storm,” exactly when and where needed, a “storm” to eclipse 9/11 in horror, enough to send a war weary people, long lied to, no longer trusting their government, down the road to war for Israel again?

Four dead Israelis in Hebron was a clue. The 43 dead in Quetta is another. The imaginary Amsterdam hijackers were meant to be one also. More will come with each day, more clues, more planted news stories, more staging, more preparing the minds to expect what so many of us know is coming.

Who do you think recruits terror cells? Who has been doing it forever? Who can travel freely, use passports of any nation and has endless money? You think there really is an Al Qaeda?

Why does everything Al Quade do only help Israel?

Is Al Qaeda another Mossad front?

Gordon Duff is a Marine Vietnam veteran, and Senior Editor at Veterans Today. His career has included extensive experience in international banking along with such diverse areas as consulting on counter insurgency, defense technologies or acting as diplomatic officer of UN humanitarian groups. Gordon Duff’s articles are published around the world and translated into a number of languages. He is a regularly on radio and tv.