Indicted Officials Too Arrogant To Resign

Steeped in a political climate of fearmongering and trauma-based mind-control, the American public is painfully unaware of its impending doom. On the election campaign, Barack Obama called for a civilian national security force, which his chief of staff, Rahm Emanuel, endorsed by demanding that 18-25 year-olds be manditorily conscriptedinto a program of 3-5 months of
“basic training…in a kind of civil defense.” Obama has stated that this security force should be just as big, just as strong,and just as well-funded as our military. With propaganda like tv-spots from CityYear and billboards from AmeriCorps at
shopping centers being unveiled, it is no surprise that the gullible American youth is eager to sign up for the spy brigades. From half-page advertisements by the CIA in the Epoch Times asking the public to join the National Clandestine Service to MSNBC articles encouraging the agency’s recruitment, to the Washington Post discussing the administration’s desire to target college students as potential spies, the government is sending Americans a clear message: “You are either with us or you are with the terrorists.” This was the central pillar in the Bush administration’s flawless execution of stupendous warcrimes.

By getting the citizens to spy on each other and report supicious behavior, dissent was effectively stifled and any accusation of misconduct was labeled “anti-American” or “conspiratorial-theoretical” in nature. By externalizing conflicts, scaring the masses with often vague, undefined “universal threats,” the Bush regime was able to get away with murder–literally. Despite all this, the Obama administration has decided to “move forward” while Top Democrats like Dennis
Kucinich have repeatedly condemned Obama for expanding many of the unConstitutional Bush programs. 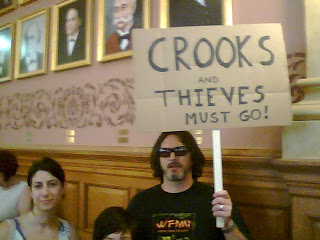 Even liberals like Jon Stewart have gone so far as on inauguration night to compare Obama to Bush, saying their rhetoric is identical. Unfortunately for President Obama, whose support in the poll numbers is slipping considerably, his confident smile may not last much longer. In an effort to help his fellow Goldman-Sachs operative, Jon Corzine, with a gubernatorial bid, Barack Obama made a trip to the state of New Jersey on the same day that 5 Jersey City police officers were wounded in a deadly shootout. One of the officers is now dead. In a desperate attempt to salvage the image of a disgraced part of the country, the President actually dragged himself and the Democratic Party into deeper mud. The president’s visit backfired on him, delivering the change we can actually see–that is, none at all–and not the change we can believe in. New Jersey, and particularly Hudson County, in which Jersey City is located, has been a notorious nexus of political corruption. 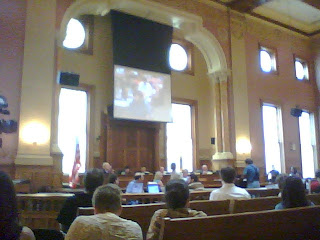 On top of the Healy administratior’s repeated abuses of the Jersey Police Department, emerged the state-wide corruption probe including various political and religious leaders. 44 people were swept up in an FBI dragnet–an investigation that took ten years–and the citizenry were again dismayed to learn that several of their elected representatives as well as spiritual leaders were in fact phonies. Local scandals and the national mood have resulted in a typical shell game, where the FBI along with the Governor and Mayor Healy are all playing

Good Cop, while the indicted City Council members are playing Bad Cop. Some of the accused are so arrogant that they refuse to resign from office. 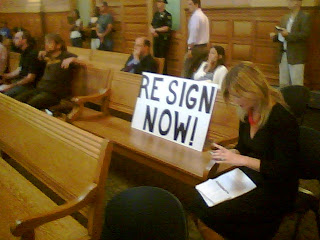 The Mayor-Elect of Hoboken, Peter
Cammarano has publicaly declared his willingness to fight the charges brought against him while simultaneously carrying out his term, even though over 200 Hoboken residents called for him to bow out. Instead of taking their cues from now-former Mayor of Secaucus Dennis Elwell to step down, the indicted council members of Jersey City are so defiant that Council President Mariano Vega has decried the allegations accusing him of bribery and has vowed to continue to remain in public (dis)service. These recent developments come at a time when the other side of the story is now being broken. It turns
out that the Feds are no friends of the people either, as the Associated Press reports that phony right-wing “hate blogger” Hal Turner is actually a long-time FBI informant who was fomenting dischord in a classic COINTELPRO (Counter-Intelligence Program) operation. With the federal government being caught redhanded running PSYOPS (Psychological Operations) that stir up racial tensions and provocateur violence, and the state and municipal government engaging in financial terrorism, it is difficult for the average citizen to comprehend the magnitude of the present-day politican situation in America. The masses are caught in a left-right paradigm; the Democrats fail to acknowledge that their party and liberal “progressive” ideologies are crumbling beneath the pressure of the independent movement in the country. Former government officials are crawling out of the woodwork to spill the beans about the true nature of America’s descent into tyranny. Eliot Spitzer has called attention to the real culprit in the financial meltdown: the Federal Reserve.

Calling it a Ponzi scheme, Spitzer warned that our entire economy is fake and on the brink of destruction. 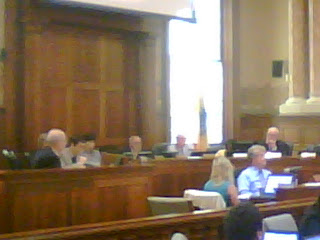 It will be refreshing to see a day when people get fired up about real issues such as a private banking oligarchy staging coups d’état one after another, forcefully seizing America’s assets and infrastructure. A recent Gallup poll reveals that 70% of Americans believe the Federal Reserve is doing a poor job and a majority of THAT majority believe that the quasi-governmental institution
needs to be abolished entirely. It will be refreshing to see a day when people get behind courageous individuals such as veteran Police Detective John Carroll of the Jersey City Police Department, who has gone public stating that 9/11 is a huge cover-up and that the government has been never properly held accountable for failing to protect the country. The issue of national security is completely invisible to the American people, who are completely oblivious that their sovereignty is being violated on all levels. Nevermind the fact that at the time of this article’s publication FEMA (Federal Emergency Management Agency) is engaging in a national-level excercise (NLE), not to respond to disasters but in fact to pre-empt “terrorists.” The fact that this NLE is being conducted in conjunction with foreign troops (“This year the United States welcomes the participation of Australia, Canada, Mexico and the United Kingdom in NLE 09. “)is an absolute outrage as many states have recently passed resolutions of sovereignty under the 10th Amendment to the Constitution. This is not a separatist movement but rather an ultimatum being issued to the federal government, which has repeatedly violated orders by the states to cease and desist its treasonous activities. 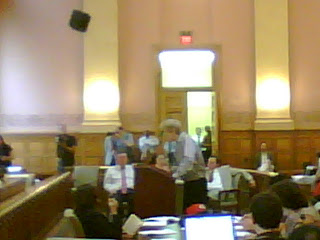 For the discerning among you, the serious students of history, this article is no doubt a recapitulation of obvious facts. For the naive, it should be a wake-up call to join the Alternative Media, expand your awareness and reject the mainstream false-reality, which is nothing more than the matrix, a world that has been pulled over your eyes to blind you from the simple truth that you are a slave on a global plantation. Change begins with the self, and the societal degradation we are witnessing is directly related to our thoughts and actions. If that is not explained and the bigger picture of the New World Order is not exposed, then the masses will continue arguing over nonsense while the real controllers of the world remain hidden from scrutiny.

You have been warned.