Since time immemorial people have been inventing or exaggerating scares to gain power. I used to think carbon dioxide posed a real threat, and I even used to be an active member of the Australian Greens. Then I discovered all the things we weren’t being told (like this and this), and how much money was involved and I was shocked.

There are many good people among the Greens who will be outraged when they realize how they have been used. 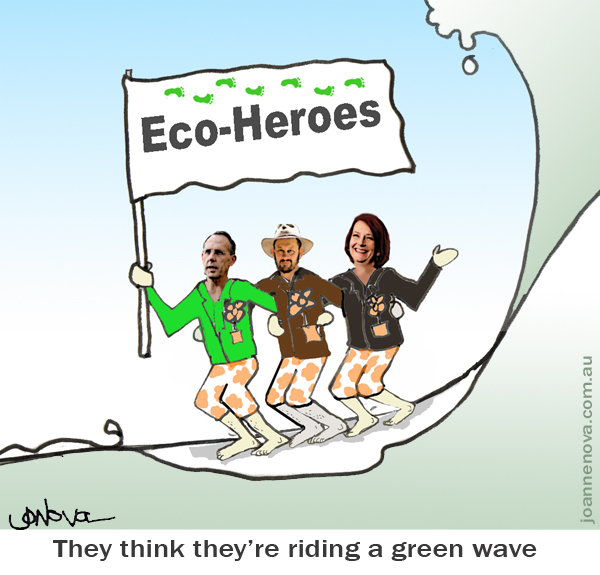 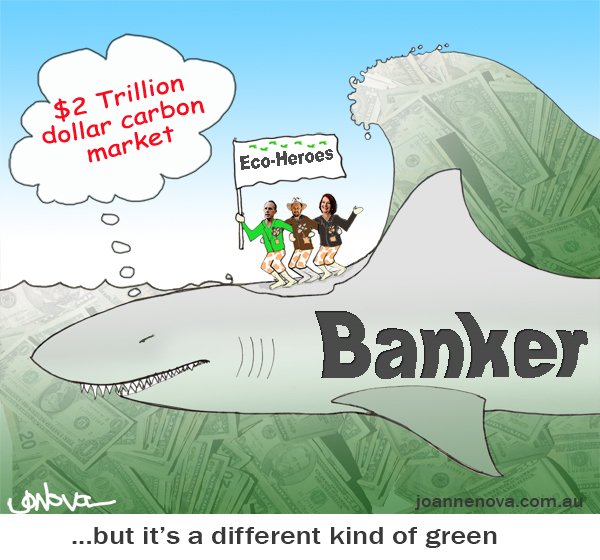 The most selfish aims are always cloaked in “good intentions”

Some Greens really believe a market based trading system is the best way to deal with pollution. But this pollution is not a pollutant,  and this “free market” is not free. Last year the carbon market reached $130 billion dollars. It’s projected to reach $2 Trillion, and you can be sure that “sub-prime” carbon is coming too. The market depends wholly on government mandate; it’s “fixed” from beginning to end. Who would buy a carbon credit if they weren’t forced to? In a free market, no one.

Worse, funneling money through fake markets is like inviting corruption to a three course meal.

It’s easy to cheat in a fake market. With real commodities (and not a government certificate) the cheats are quickly exposed. If someone sells you a supertanker of coal and it turns up empty, you notice. If someone sells you a filing cabinet of fake certificates, how can you tell? The European system is rife with corruption. The two major auditors were both suspended in the last 18 months. Loop holes and tricks mean billions of dollars have been wasted — much of it funneled to bankers, and much of the rest to mafiosi in the third world.

The Bankers are rubbing their hands in glee. They are the brokers in this Big New Market (based on thin air). They stand to make money on every trade — no matter if you buy or sell (and you will be forced to buy, if only indirectly), you pay the banker. No wonder they are pushing it.

The Greens are being played for patsies by bankers who want the profits, and by bureaucrats who want their nice jobs and grants, their junkets, and their accolades.

True grassroots greens ought to be livid that real environmental issues are being ignored (I am). We should be worried about things like soil erosion, declining fish stocks, destruction of old growth forest, or rampant malnutrition. The problem is that green groups have become the multimillion dollar organizations they pretend to oppose. The managing directors of Greenpeace, WWF etc et al (all hundred million dollar organizations) like to play with the Big Time movers and shakers, they like the status, they like the extra donations, and gosh but they feel important. And they get far more money from global warming  than they do from street donations (WWF stands to rake in $60 billion from Amazonian carbon credits, the tin-shakers on street corners are just for show).

As usual, it’s all about the money

The Labor Party still think we need a price on carbon, and that a community committee can somehow make the call for the rest of us. But that’s why we elect Members of Parliament isn’t it? We hope we elect people who can see a profit-making-scam coming and protect the Australian people from it, rather than people who jump in with both feet.

The opposite of skeptical is gullible.

Won’t any of our major parties stand up and call a spade a spade?

The US government spend $79 billion dollars to find a crisis due to carbon. They couldn’t find good evidence, so instead they bought a “consensus”. The IPCC was set up to assess “the danger”. They are never going to announce there isn’t any and their committee, their prizes, and their junkets are over. The money-soaked systems are corrupted.

A pollutant? You must be kidding

CO2 is an aerial fertilizer, responsible for increasing crop yields around the world by about 15% over the last century. Market gardeners pump it on their plants. The irony is that the Greens are trying to limit the key ingredient of life on earth — carbon. We are carbon life forms. Satellites show that as the world has warmed and atmospheric CO2 grew, the world’s biomass increased roughly 3% per decade. Plants love CO2.

The empirical evidence is telling us repeatedly that carbon only does about 1/6th of the warming that the IPCC claim it does. (See my debate with a Dr of Paleoclimate science for the details: Part 1, 2, 3&4, and especially 5). Thousands of scientists (including some giants) are rising up in the largest grassroots movement ever seen to warn us that the brand name Science is being used against us.

This issue will keep bringing down leader after leader because it is based on an untruth and kept alive by bullying.

To get up to speed fast, read these short booklets: The Skeptics Handbook, Climate Money and Global Bullies Want Your Money.