(NYTimes) – FOR seven years I have remained silent about the false claims magnifying the effectiveness of the so-called enhanced interrogation techniques like waterboarding. I have spoken only in closed government hearings, as these matters were classified. But the release last week of four Justice Department memos on interrogations allows me to shed light on the story, and on some of the lessons to be learned. 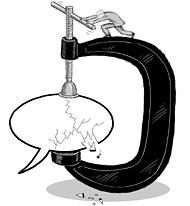 One of the most striking parts of the memos is the false premises on which they are based. The first, dated August 2002, grants authorization to use harsh interrogation techniques on a high-ranking terrorist, Abu Zubaydah, on the grounds that previous methods hadn’t been working. The next three memos cite the successes of those methods as a justification for their continued use.

It is inaccurate, however, to say that Abu Zubaydah had been uncooperative. Along with another F.B.I. agent, and with several C.I.A. officers present, I questioned him from March to June 2002, before the harsh techniques were introduced later in August. Under traditional interrogation methods, he provided us with important actionable intelligence.

We discovered, for example, that Khalid Shaikh Mohammed was the mastermind of the 9/11 attacks. Abu Zubaydah also told us about Jose Padilla, the so-called dirty bomber. This experience fit what I had found throughout my counterterrorism career: traditional interrogation techniques are successful in identifying operatives, uncovering plots and saving lives.

There was no actionable intelligence gained from using enhanced interrogation techniques on Abu Zubaydah that wasn’t, or couldn’t have been, gained from regular tactics. In addition, I saw that using these alternative methods on other terrorists backfired on more than a few occasions — all of which are still classified. The short sightedness behind the use of these techniques ignored the unreliability of the methods, the nature of the threat, the mentality and modus operandi of the terrorists, and due process.

Defenders of these techniques have claimed that they got Abu Zubaydah to give up information leading to the capture of Ramzi bin al-Shibh, a top aide to Khalid Shaikh Mohammed, and Mr. Padilla. This is false. The information that led to Mr. Shibh’s capture came primarily from a different terrorist operative who was interviewed using traditional methods. As for Mr. Padilla, the dates just don’t add up: the harsh techniques were approved in the memo of August 2002, Mr. Padilla had been arrested that May.

One of the worst consequences of the use of these harsh techniques was that it reintroduced the so-called Chinese wall between the C.I.A. and F.B.I., similar to the communications obstacles that prevented us from working together to stop the 9/11 attacks. Because the bureau would not employ these problematic techniques, our agents who knew the most about the terrorists could have no part in the investigation. An F.B.I. colleague of mine who knew more about Khalid Shaikh Mohammed than anyone in the government was not allowed to speak to him.

It was the right decision to release these memos, as we need the truth to come out. This should not be a partisan matter, because it is in our national security interest to regain our position as the world’s foremost defenders of human rights. Just as important, releasing these memos enables us to begin the tricky process of finally bringing these terrorists to justice.

The debate after the release of these memos has centered on whether C.I.A. officials should be prosecuted for their role in harsh interrogation techniques. That would be a mistake. Almost all the agency officials I worked with on these issues were good people who felt as I did about the use of enhanced techniques: it is un-American, ineffective and harmful to our national security.

Fortunately for me, after I objected to the enhanced techniques, the message came through from Pat D’Amuro, an F.B.I. assistant director, that “we don’t do that,” and I was pulled out of the interrogations by the F.B.I. director, Robert Mueller (this was documented in the report released last year by the Justice Department’s inspector general).

My C.I.A. colleagues who balked at the techniques, on the other hand, were instructed to continue. (It’s worth noting that when reading between the lines of the newly released memos, it seems clear that it was contractors, not C.I.A. officers, who requested the use of these techniques.)

As we move forward, it’s important to not allow the torture issue to harm the reputation, and thus the effectiveness, of the C.I.A. The agency is essential to our national security. We must ensure that the mistakes behind the use of these techniques are never repeated. We’re making a good start: President Obama has limited interrogation techniques to the guidelines set in the Army Field Manual, and Leon Panetta, the C.I.A. director, says he has banned the use of contractors and secret overseas prisons for terrorism suspects (the so-called black sites). Just as important, we need to ensure that no new mistakes are made in the process of moving forward — a real danger right now.