(GUARDIAN)   Eating disorder charities are reporting a rise in the number of people suffering from a serious psychological condition characterised by an obsession with healthy eating.

The condition, orthorexia nervosa, affects equal numbers of men and women, but sufferers tend to be aged over 30, middle-class and well-educated. 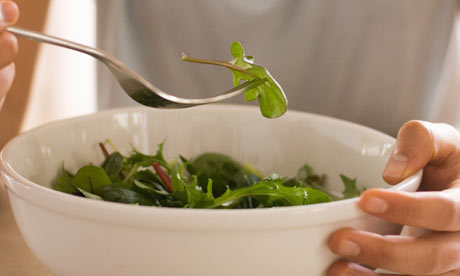 The condition was named by a Californian doctor, Steven Bratman, in 1997, and is described as a “fixation on righteous eating”. Until a few years ago, there were so few sufferers that doctors usually included them under the catch-all label of “Ednos” – eating disorders not otherwise recognised. Now, experts say, orthorexics take up such a significant proportion of the Ednos group that they should be treated separately.

“I am definitely seeing significantly more orthorexics than just a few years ago,” said Ursula Philpot, chair of the British Dietetic Association’s mental health group. “Other eating disorders focus on quantity of food but orthorexics can be overweight or look normal. They are solely concerned with the quality of the food they put in their bodies, refining and restricting their diets according to their personal understanding of which foods are truly ‘pure’.”

Orthorexics commonly have rigid rules around eating. Refusing to touch sugar, salt, caffeine, alcohol, wheat, gluten, yeast, soya, corn and dairy foods is just the start of their diet restrictions. Any foods that have come into contact with pesticides, herbicides or contain artificial additives are also out.

The obsession about which foods are “good” and which are “bad” means orthorexics can end up malnourished. Their dietary restrictions commonly cause sufferers to feel proud of their “virtuous” behaviour even if it means that eating becomes so stressful their personal relationships can come under pressure and they become socially isolated.

“The issues underlying orthorexia are often the same as anorexia and the two conditions can overlap but orthorexia is very definitely a distinct disorder,” said Philpot. “Those most susceptible are middle-class, well-educated people who read about food scares in the papers, research them on the internet, and have the time and money to source what they believe to be purer alternatives.”

Deanne Jade, founder of the National Centre for Eating Disorders, said: “There is a fine line between people who think they are taking care of themselves by manipulating their diet and those who have orthorexia. I see people around me who have no idea they have this disorder. I see it in my practice and I see it among my friends and colleagues.”

Jade believes the condition is on the increase because “modern society has lost its way with food”. She said: “It’s everywhere, from the people who think it’s normal if their friends stop eating entire food groups, to the trainers in the gym who [promote] certain foods to enhance performance, to the proliferation of nutritionists, dieticians and naturopaths [who believe in curing problems through entirely natural methods such as sunlight and massage].

“And just look in the bookshops – all the diets that advise eating according to your blood type or metabolic rate. This is all grist for the mill to those looking for proof to confirm or encourage their anxieties around food.”