Calls to Murder MK Who Was on Flotilla 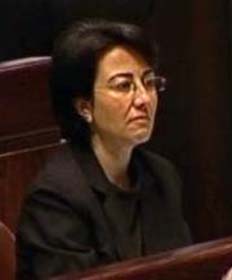 The majority of Knesset members from left and right (Kadima, Likud) yesterday attacked Haneen Al-Zoubi, the Israeli-Arab parliamentarian member of the National Democratic Alliance who was on “Mavi Marmara”, one of the ships assaulted during the Israeli maritime piracy operation against the International peace activists on their way to break the genocidal siege imposed on Gaza. Al-Zoubi was released from police custody early Tuesday morning. The Knesset members cursed Al-Zoubi and tried several time to attack her, calling her “terrorist, traitor, trojan horse, bloodthirsty”, demanding that security check if she had a knife with her in the Knesset, and also that she should be deported out of Israel, during a debate about the IDF Flotilla raid in which Al-Zoubi gave a speech as a result of being attacked by other members when she arrived the session (Knesset rules demand that a member who is attacked be called to the podium to give a speech about the contended issue).

The Knesset meeting of yesterday could be described as one of the most violent sessions in the history of the Knesset. The Israeli parliamentarians replied angrily at MK Al-Zoubi, who described the attack of past Monday on fleet of freedom, in which at least nine Turkish citizens were murdered during the criminal act of piracy in violation of international laws, and called for an international commission of inquiry. Al-Zoubi asked the angry parliamentarians: “Who is the criminal?  Did I murder anyone?” She continued asking her legitimate questions in the middle of wild screaming, shouting and incitements against her person during the uproar of the jewish MKs.

Al-Zoubi said: “Why are you afraid of the investigation? Why do you oppose revealing the truth? If your allegations are true, why have you taken away the cameras of the journalists? 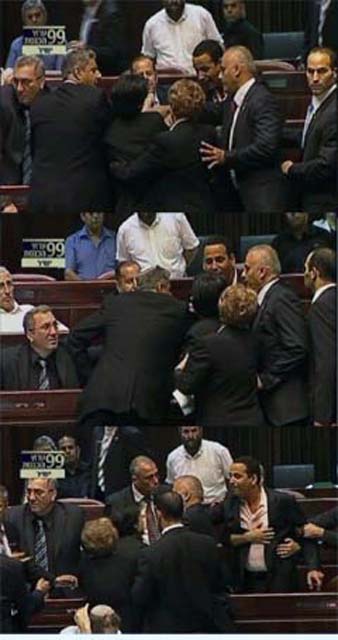 Why have you denied them permission for filming and photographing and broadcasting their reports? You are claiming that you filmed everything: Where are the images of the martyrs and the wounded? Why you are hiding them? Why did you only publish the pictures linked to the IDF operation? Why you did not publicize film of the ten men who you murdered?”

Among the unprecedented strong remarks in Israeli Knesset, MK Miri Regev (Likud), who had asked that the attorney general arrest Al-Zoubi after she participated in the Flotilla: “Al-Zoubi is partner in a double crime, her participation with the terrorists in the fleet is one, and the other is a moral crime against Israel”. She added: “We do not need a trojan horse in the Knesset”. “Rohi Ala Gaza Ya Khaenah” which means “Go back to Gaza, you traitor” said Regev in Arabic to Al-Zoubi.

Anastasia Michaeli from “Israel Beiteina” (an ultra-extremist right-wing party) approached Al-Zoubi and tried to physically assault her. She took the podium and attempted to stand between Al-Zoubi and the microphone, but Dr. Jamal Zahalka ran forward to defend Al-Zoubi. But both Michaeli and Zahalka were expelled from the session by Knesset ushers. (Pic. Credit and material source Arab 48).

When Al-Zoubi took the podium again, MK Yoel Hasson (Kadima) yelled to Reuven Rivlin to “be careful, because there is a terrorist standing next to you”. MK Eli Aflalo, also from Kadima, remained standing in an aisle yelling and gesticulating until he was forcibly removed. MK Arieh Eldad (National Union) called Israeli Arabs “enemies of Israel”, Kadima MK Yulia Shamalov Berkovitz said that the Arab parties’ Knesset members were “parliamentary spies”.

The chair of the session, Deputy Knesset speaker Carmel Shama addressed Al-Zoubi to give her speech, according to the system of the Knesset, which allows any MK to give a speech if others have attacked them. The Knesset members from the right and left parties objected this decision and tried to prevent MK Al-Zoubi from giving her speech, and they also assaulted the head of the parliamentary Block Assembly, Dr. Jamal Zahalka, and all Arab parliamentarians who were attended the meeting.

Shama called a five-minute break when the MKs refused to calm down and stop yelling and shouting against Al-Zoubi. He requested that the MKs to allow Al-Zoubi to talk according to Knesset Regulations “so that we will not have a scandal in our ‘democracy’”. He tried to convince the others saying: “I’m angry just like you, and I hear a provocative talk from her, but I must conceal my anger and listen to her”.

Despite the unprecedented inciting which took place in the Knesset, and despite all the insults and attempts of attack, Al-Zoubi kept calm and controlled her composure on podium. She responded to the campaign of incitement saying very calm: “I will not respond to incitement and the insults, because I simply despise that and the persons who say it”. She added: “when I agreed to participate in the Flotilla; I did that without hesitation because it is my national political and ethical obligation to oppose the imprisonment of 1.5 million people, and also to participate in any activity which could lead to lift the siege on Gaza”. She described the blockade of Gaza as an “illegal, inhuman, illegitimate siege, and all politicians who have a moral position must oppose the blockade of Gaza; only the immoral politicians support the blockade”.

On the other hand, the office of MK Haneen Al-Zoubi received hundreds of phone calls and electronic messages which called for killing her or physically hurting her. Others sent her office messages wishing her a soon death, and wishing various members of her family to die in the same way as the peace activists were murdered on the freedom flotilla. Others again called for her expulsion from the Knesset and the country.

On Wednesday, MK Danny Danon said that the Ministerial Committee for Legislation had agreed to debate a bill on Sunday that he had recently drafted and which would allow for removing an acting MK from their position if he or she were found to have committed incitement against the State of Israel. MK Miri Regev’s office said that she had submitted a similar bill to the Knesset secretary on Wednesday afternoon.

Carmel Shama also announced that he had submitted a request to the Central Elections Committee to block Al-Zoubi from being able to run in any future Knesset election.

xenophobe from the extremist “Shas” party, petitioned Attorney General Yehuda Weinstein to help him revoke the Israeli citizenship of Israeli Arab MK Haneen Al-Zoubi, who took part in the effort to break Israel blockade of Gaza on a Flotilla of aid ships. Haneen Al-Zoubi “headed a gang of terrorists who aimed to hurt Israel IDF soldiers, under the protection of her parliamentary immunity”, according to Yishai.

Yishai asked Weinstein for his support, as the Supreme Court had ruled that an interior minister cannot revoke a person’s citizenship without the written authorization of the attorney general. “I ask that you study the laws which would allow me stripping the immunity from any member of Knesset that would try, under the protection of immunity, to aid and cooperate with terrorists and enemies that have made IDF soldiers and citizens of Israel their targets”.

Yishai believes that Israel has the right to strip the citizenship from the Arab-Israel citizens and to destroy Gaza.

See the Video Below