An emotional fight over land for Flight 93 memorial

By red
Tweet
(CNN) — A chain link fence now stands between Tim Lambert’s land and the impact site of United Airlines Flight 93, which crashed here on September 11, 2001. The property has been in Lambert’s family for almost 80 years. 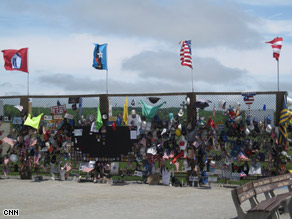 A temporary memorial has been set up to honor the victims of the United Airlines Flight 93 crash.

“My grandfather purchased about 200 acres in the 1930s, and he would cut timber and sell the timber off, and he would build cabins as well,” Lambert says. “That’s how he got the family through the Depression.”

Lambert says he had no plans for the land, he just knew he wanted to hold on to it. “There’s a lot of natural resources in this area — natural gas, coal,” he says.

That all changed the day 40 passengers and crew died trying to take control of a Boeing 757 that had been hijacked by four terrorists as it took off from Newark, New Jersey, bound for San Francisco, California. It is believed the hijackers had intended crash the plane into the White House or the U.S. Capitol.

Plans for a permanent memorial have been in the works for years. Congress passed a law in 2002 instructing the National Park Service to establish a national memorial where the crash occurred. Part of it would be on Lambert’s land.

In the seven years since, some of the most important land needed for the massive project has remained in limbo, producing an emotional debate among landowners, family members and the National Park Service. See plans for the proposed Flight 93 Memorial

At the center of the dispute is the government’s plan to take the remaining land needed by using its power of eminent domain. The government can seize privately owned property to convert it to public use after paying the owner fair market value.

Lambert’s land is key to the project. He owns 6 acres that are just feet from the crash site. He has yet to reach an agreement with the government to buy his land.

“Eminent domain was sort of dropped on us at the last second here,” he says, “and it feels like we never even had a chance to talk about some of the issues that we needed to address during the negotiations.”

Lambert still finds debris from the plane on his land.

“Red and blue wire all over the place,” he says as he bends over to pick up a piece. “Here it is almost eight years later.”

The National Park Service says time is running out if the memorial is to be ready by September 11, 2011, the 10-year anniversary of the terrorist attacks. It says it has to use eminent domain for 166 essential acres that it has been unable to purchase.

“We’ve held off using it until we’ve got here, really at the very last stage of this where we have no other choice,” says National Park Service associate director Steve Whitesell.

The amount of land needed for the memorial is just over 2,200 acres, about 1,400 of which is near the crash site, where there will be a visitor center. The other 800 acres would create a buffer around the site to protect the rural setting.

That is where Randy and Linda Musser live — on more than 100 acres of land, 62 of them within the memorial park boundaries. The Mussers enjoy hunting, fishing and horseback riding on their land, which is about three-quarters-of-a-mile from the crash site.

“This eminent domain cloud hangs over this whole piece of property now,” Randy Musser says, standing by a pond where he likes to fish. He was a member of a committee formed with Flight 93 family members to establish the boundaries of the park.

“If I knew the National Park Service was going to be able to use eminent domain to acquire property within the park boundary, I would had fought that at the time the park boundary was established to keep as much property out of the park as possible,” Musser says.

The Mussers now fear that their land isn’t safe from the government and say it’s not needed for the memorial. “We have to play fair, we have to follow the rules and they just change the law to suit their own needs,” says Linda Musser.

For Patrick White, vice president of Families of Flight 93, this project is a labor of love. White’s cousin, Louis Nacke, was killed on United Flight 93. White is leading the effort to acquire all the land needed for the memorial.

“We’re creating a place where the 40 heroes of Flight 93 can be revered and remembered,” White said from his law office in Naples, Florida.

White says the negotiations with landowners has been challenging and supports the governments use of eminent domain.

“No one has ever questioned that there is a public purpose to these lands'” White says. “Their purpose became public the minute that those private citizens’ lives and remains became part of those lands.”

Lambert says he feels the same way as he walks just a few feet from where the plane crashed. “A lot of people lost their lives here and this is their final resting place. … That’s one thing I always keep in mind when I come here and I am walking through these woods.”

This isn’t just about money, Randy Musser says. It’s about doing what’s right, allowing landowners to continue to live on their land and use it the way they intended before that day. “That loss of freedom is probably the thing that bothers people more than anything else,” he says.

Neither the government nor landowners will comment on how much money has been offered for the land yet to be acquired.

Patrick White said he remains confident the memorial will be completed in time. “Getting this done is a commitment that must be achieved. … These are folks who as citizen soldiers stood up and we all need to recognize that at a place that’s appropriate.”

To make that happen, the National Park Service says it needs to start construction this November for a ribbon-cutting ceremony on September 11, 2011.

The courts may have the final say. Government lawyers are expected to file a lawsuit in Pittsburgh next week to condemn the property for public use.