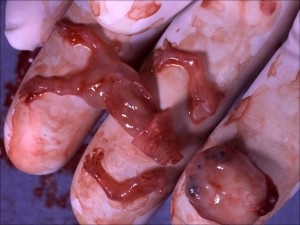 (THE AMERICAN DREAM)   Did you know that aborted babies are being chopped up and sold to medical researchers all over America?  There is a federal law which is supposed to ban this practice, but it contains a gigantic loophole that abortion clinics are using to sell huge amounts of aborted baby parts to the scientific community.  The loophole in the federal law allows “reasonable payments associated with the transportation, implantation, processing, preservation, quality control, or storage of human fetal tissue.”  But there are no guidelines as to what those “reasonable payments” should be and the Obama administration is not about to start prosecuting abortion clinics.  So aborted baby parts from American babies will continue to be very quietly sold for profit to medical researchers and most Americans will never hear anything about it.  But future generations will look back in horror at what we allowed to be done right under our noses.

With the full approval of the Obama administration, one company in the United States has plans to inject aborted baby brain cells into the eyes of patients to see if that will help improve their vision.  The following is from a recent article on LifeNews.com….

Scott Fischbach, the director of Minnesota Citizens Concerned for Life uncovered the information showing a clinical trial approved by the Food and Drug Administration uses brain tissue from aborted unborn babies to treat macular degeneration. StemCells Inc. will inject fetal brain stem cells into the eyes of up to 16 patients to study the cells’ effect on vision.

As Fischbach correctly notes, a fetus must be at a certain stage of development before brain tissue can be harvested for this kind of research….

“StemCells Inc. is not using embryonic stem cells. A five-day-old human being at the embryonic stage does not have a brain, but a fetus at 10 or 20 weeks of development with visible fingers, toes and ears has a functioning brain,” said Fischbach. “Developing human beings in the womb are treated simply as raw material for laboratory experimentation by StemCells Inc. and other companies seeking to monetize aborted unborn children.”

But the harvesting of tissue and organs from aborted babies is definitely not new.  It has been going on for a long time.

For example, a recent article posted on worldmag.com describes the very big business that the Birth Defects Research Laboratory at the University of Washington in Seattle does in aborted baby parts….

It’s known within the research community as a top government distributor of fetal tissue. Last year the Puget Sound Business Journal stated the lab “in 2009 filled more than 4,400 requests for fetal tissue and cell lines.”

The lab’s grant records indicate it received $579,091 from the NIH last year. To date, it has retrieved the products of 22,000 pregnancies. According to a description the lab provided in its most recent grant applications, an increase in nonsurgical abortion methods has “created new obstacles to obtaining sufficient amounts of high quality tissue. To overcome these problems and meet increasing demand, the Laboratory has developed new relationships with both local and distant clinics.”

Once again, it is supposed to be against federal law to buy aborted baby parts from abortion clinics.  But this “problem” is avoided by taking advantage of the loophole that allows for “reasonable payments associated with the transportation, implantation, processing, preservation, quality control, or storage of human fetal tissue.”

An article posted on LifeDynamics.com describes how this system works….

2) The buyer – usually a researcher working for a medical school, pharmaceutical company, bio-tech company or government agency – supplies the wholesaler with a list of the baby parts wanted.

3) When such orders are received by the wholesaler, they are faxed to the retrieval agent at the clinic who harvests the requested parts and ships them to the buyer via FedEx, Airborne or a similar common carrier.

4) These parts are “donated” by the clinic to the wholesaler who turns around and “donates” them to the buyer. The buyer then “reimburses” the wholesaler for the cost of retrieving the parts.

In the end, nobody is technically “buying or selling” anything but they all get what they want and a lot of money changes hands.

A number of years ago an abortion industry insider came forward with shocking details of how this organ harvesting operation actually functions.  The following is from a very eye-opening InvestigateDaily article….

It was an interview that shocked America. An Insider, spilling the beans on massive malpractice to a reporter on ABC’s 20/20. Only this time, it wasn’t Big Tobacco in the gunsights, it was the US abortion industry, exposed as harvesting the organs from aborted babies. According to former abortion clinic technician Dean Alberty, clinics were harvesting eyes, brains, hearts, limbs, torsos and other body parts for sale to the scientific market: laboratories wanting to test new drugs or procedures, or researchers trying to find the causes of genetic disorders or discover new ways of treating disorders like Parkinsons.

Sometimes babies actually survive the initial abortion procedure and workers actually have to kill the babies themselves before harvesting the organs….

Alberty worked for a Maryland agency called the Anatomic Gift Foundation, which essentially acted as a brokerage between universities and researchers seeking body parts, and the abortion clinics providing the raw material. Alerted by the clinics about the races and gestations of babies due to be aborted each day, AGF technicians would match the offerings with parts orders on their client lists. Alberty and his colleagues would turn up at the abortions that offered the best donor prospects to begin dissecting and extracting what they needed before decay set in.

“We would have a contract with an abortion clinic that would allow us to go in…[to] procure fetal tissue for research. We would get a generated list each day to tell us what tissue researchers, pharmaceuticals and universities were looking for. Then we would go and look at the particular patient charts—we had to screen out anyone who had STDs or fetal anomalies. These had to be the most perfect specimens we could give these researchers for the best value that we could sell for.

“We were taking eyes, livers, brains, thymuses, and especially cardiac blood…even blood from the limbs that we would get from the veins” he said.

Alberty told of seeing babies wounded but alive after abortion procedures, and in one case a set of twins “still moving on the table” when clinicians from AGF began dissecting the children to harvest their organs. The children, he said, were “cuddling each other” and “gasping for breath” when medics moved in for the kill.

You can read the rest of that shocking article right here.

So are you sick to your stomach yet?

This is a hard article to write, but the American people need to be confronted with the truth.  If we ignore the horrors going on right under our noses, then that would make us just like so many of the other nightmarish societies throughout history that we rightly condemn.

Sadly, most Americans don’t even realize that large numbers of consumer products on our supermarket shelves contain ingredients which have been cultivated using aborted human fetal cell lines.

This information is not hard to find.

But people do not like to talk about it.

There are price lists for human fetal tissue all over the Internet.  You can find one example right here.

So does it bother you that aborted babies are being chopped up and sold to researchers all over America?

Or are you perfectly fine with it?

Please feel free to leave a comment with your thoughts below….