2,000 sharks slaughtered for fins off Colombia 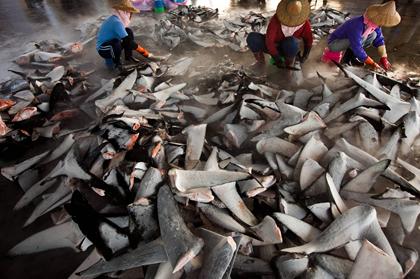 (USA TODAY)   About 2,000 sharks appear to have been slaughtered for their fins in a Pacific Ocean marine sanctuary off Colombia, theGuardian reports.

Hammerhead, Galápagos and whale sharks were among the carcasses research divers found in the waters of the Malpelo preserve, a UNESCO World Heritage site, about 300 miles off Colombia. They saw fishing trawlers — 10 flying the Costa Rican flag — entering the zone illegally, said Sandra Bessudo, a marine biologist who is the top environmental adviser to President Juan Manuel Santos.

“When the divers dove, they started finding a large number of animals without their fins. They didn’t see any alive,” she said. Video shot by one diver shows the bodies of dead sharks on the ocean floor.

Costa Rica’s Foreign Ministry said that it “energetically condemns” the reported finning and that Costa Rican-flagged ships would be prosecuted if they were involved.

Shark fin soup is a traditional — and expensive — Chinese delicacy and folk medicine with unproven benefits. Several species are threatened because of the increasing slaughter of sharks to meet growing demand as Chinese become more prosperous. China is the biggest consumer and importer of shark fins.

This month, California banned the possession, sale and distribution of imported shark fins beginning in 2013. Some Chinese denounced the law as racist.

One Response to 2,000 sharks slaughtered for fins off Colombia